Original Sin or Original Forgiveness – What is the Lesson? 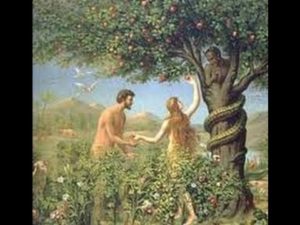 The story of Adam and Eve are quite similar in the Bible and the Quran with minor differences yet the lessons derived from these stories differ greatly. Sometimes minor changes to any document can completely alter the actual meaning of the story. Both the scriptures talk about the creation of Adam and then Eve which are somewhat similar. However the events after their creation are of significance.

Soon after God commands them not to eat of this particular tree as eating of it would cause harm to them and the act would be transgression.

We said: “O Adam! dwell thou and thy wife in the Garden; and eat of the bountiful things therein as (where and when) ye will; but approach not this tree, or ye run into harm and transgression.” – [Quran 2:35]

According to the Bible, God said that if they would eat from this tree, they would die.

But of the tree of the knowledge of good and evil, thou shalt not eat of it: for in the day that thou eatest thereof thou shalt surely die. – [Genesis 2:17]

According to the Bible, this warning was given to Adam before the creation of his wife, Eve. However the Quran corrects this bit and mentions that at the time of the warning, Eve already existed as the verse refers to both.

Soon after enters the role of Satan who according to the Bible whispered to Eve saying that if they would eat of this tree then they would never die, contrary to what God warned Adam earlier. This is an important stage in the stories of the two scriptures. According to the Bible, it was the woman who was led astray and she ate the fruit and also gave it to Adam.

And when the woman saw that the tree was good for food, and that it was pleasant to the eyes, and a tree to be desired to make one wise, she took of the fruit thereof, and did eat, and gave also unto her husband with her; and he did eat. – [Genesis 3:6]

The Quran does not put the burden of the sin on the woman but makes it clear that both were led astray by Satan and hence both are equally responsible for it.

Then did Satan make them slip from the (garden), and get them out of the state (of felicity) in which they had been. We said: “Get ye down, all (ye people), with enmity between yourselves. On earth will be your dwelling-place and your means of livelihood – for a time. – [Quran 2:36]

From these verses it is clear that both Adam and Eve were misled by Satan and it was not the woman who made the man do wrong. When religious doctrines like the Bible states that it was Eve who came under the influence of the whispers of Satan and thus ate the forbidden fruit and gave it to Adam to eat, it subliminally programs men to believe that woman is evil by nature. When God asks Adam from where he got the sense that he was naked, meaning the sense of shame, Adam replied:

Clearly Adam is accusing the woman as being the culprit and later on when we keep on reading this chapter, we see that it is further clarified that Adam listened to his wife an under her influence ate the fruit (Genesis 3:16) rather than under the influence of Satan. The Quran corrects this and makes it clear that while Satan did mislead the woman, Satan also misled the man.

This act of Adam and Eve eating the forbidden fruit is labeled by Christianity as the Original Sin. They say that because of this Original Sin, all people born afterwards were born in sin. The newborn baby according to Christianity is a sinner. Islam however goes on to give us a deeper lesson from the story.

It is learnt that after eating from the forbidden tree, Adam repented and God forgave him for God is Most Merciful. This is the lesson given to all Mankind by Quran. It is not of the Original Sin but of Original Forgiveness which shows the Merciful nature of God.

Man is by nature bound to commit sins either of small or major magnitude. God knows this nature of man because He is the Creator. God on the other hand is Most Merciful and is there to forgive man when he sincerely repents. The lesson derived from the Quran is much more complete and gives us a better picture of the nature of God. For forgiveness, all man needs to do is to turn towards God, repent for the wrong he did and promise not to repeat it. God who is Most Merciful then forgives the creation and on the Day of Judgment, this act will not be held up against him.

Thus the lesson which God wanted to give for all of humanity was that of Original Forgiveness rather than Original Sin. Islam teaches us this lesson and informs us that all newborns are without the burden of any sin on their shoulders. They are innocent. From the story the theme is easy to understand. God created man – Man committed sin – Man turned towards God for forgiveness – God forgave man for indeed God is Most Merciful.

Biography of Ustadz Ahmed Barcelon and how he embraced Islam

Mohammad in the Bible